The popularity of Battery Electric Vehicles as an alternative to petrol and diesel powered engines continued to grow across the UK and Ireland in 2022 as figures recently revealed by National authorities illustrate.

In the United Kingdom a total of 250, 407 battery electric cars were registered in the 12 months if 2022 compared to 181, 062 for 2021, an increase of 38% despite a reduction of approx. 3% in the wider car market. Reflecting on this increase, Ben Nelmes, Chief Executive Officer at New Automotive said the figures are the result of years of government support and fiscal incentives and a clear long-term ambition to end the sales of fossil fuelled cars by 2035. 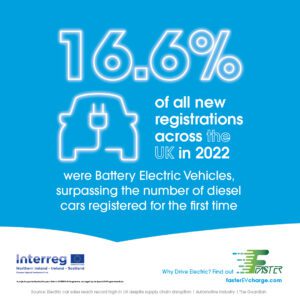 16.6% of all new registrations across the UK in 202 were Battery Electric Vehicles

Figures released by the Society of the Irish Motor Industry unveiled an 81% uplift in electric vehicle uptake in the Republic of Ireland with 15,678 new electric cars registered compared to 8,646 in the previous year. Brian Cooke, SIMI Director General added that expectations for 2023 were that further growth would be witnessed with EV sales, but that the extent of the growth will be determined not only by supply but also Government support in terms of the current EV grant and ongoing investment in national charging infrastructure. 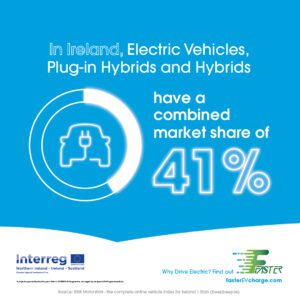 In Ireland, Electric Vehicles, Plug-in Hybrids and Hybrid Vehicles have a combined market share of 41%

‘Figures release for both the UK and Ireland in the past week demonstrate the continued enthusiasm for electric vehicles and a desire for something new in the market. Motorists are encouraged by new technology and increasing choice in the sector, and key messages around the use of electric vehicles are being realised by drivers particularly those around running and maintenance costs. Concerns do however still remain in both jurisdictions around the provision of charging infrastructure and the rising costs of electricity and 2023 will be another interesting year for the market as we move beyond COVID-19 and hopefully see some reduced pressures on supply chains.’ 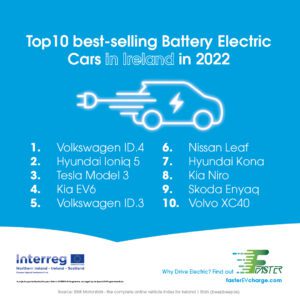 The top 10 selling battery electric cars for both regions have also been revealed, with some notable similarities across the market with brands such as Tesla, Volkswagen, Kia and Nissan appearing on both lists. 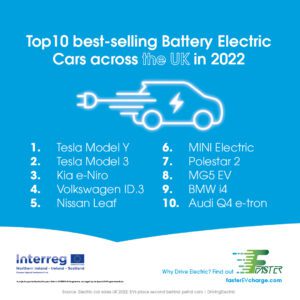 The FASTER Project will install 73 rapid charging stations across Northern Ireland, Western Scotland and the Republic of Ireland (Border Region) in 2023.

For further information Electric Vehicle registrations in the Republic of Ireland visit https://stats.beepbeep.ie/