Results published from a recent survey carried out on behalf of the FASTER Project has revealed that 54% of motorists living in the INTERREG area (Northern Ireland, Western Scotland and Republic of Ireland – border region) are likely to choose a Battery Electric Vehicle when purchasing their next car.

Almost 1800 drivers from across the region took part in this survey which further demonstrates intentions to move away from petrol and diesel fuelled vehicles.

Drivers and transport users from across the three regions were invited to participate in the survey conducted by Glasgow based, Transport Research Partners with the aims to uncover any changes in attitudes to zero emission vehicle use over the past 12 months.

The FASTER Project, which supported the development and the distribution of this survey research is a €6.4 million EU funded initiative under the INTERREG VA programme.

Having launched one year ago, the project is managed by the Special EU Programmes Body to facilitate the transition to electric vehicles. Match-funding for the FASTER project has also been provided by the Department for Infrastructure in Northern Ireland and the Department for Transport in Ireland, as well as Transport Scotland.

The key aim of the FASTER Project is to deliver an interoperable 73 rapid charging stations across Western Scotland, Northern Ireland and the Republic of Ireland border region before the end of October 2023.

‘We are delighted in East Border Region to be at the forefront of this exciting and much needed project. The results from the survey illustrate that the 73 rapid chargers the FASTER project will bring to the three project jurisdictions of N.I., the border Region of R.O.I. and Western Scotland are vital to developing our EV infrastructure and will be well utilised. We look forward to reporting on project progress over the coming months as we proceed with procurement in each jurisdiction’.

“This past 12 months has been one of the most challenging periods for motorists and transport users living across the three project regions with fuel shortages, price increases and the rising cost of living. Not only does the survey reveal that across the project areas 54% of all motorists are strongly considering the switch to electric vehicles, over 1300 of those surveyed reflected that their awareness of electric vehicles had improved this past year with 59% of all respondents confirming that they had taken a test drive in a vehicle not powered by traditional fuels.

South West College is leading an educational programme to promote the recognised benefits of electric vehicles and to dispel any persisting myths or inaccuracies. We have developed a series of monthly webinars led by respected automotive industry professionals which are designed to answer key questions around electric vehicle use and ownership and we continually engage with a range of industry organisations and user groups to determine new and efficient methods to promote the technology.”

Over the coming months South West College will work alongside councils in Northern Ireland and the Republic of Ireland to assist them with the development of their own fleet and electric vehicle infrastructure strategies.

Other key findings from the survey include: 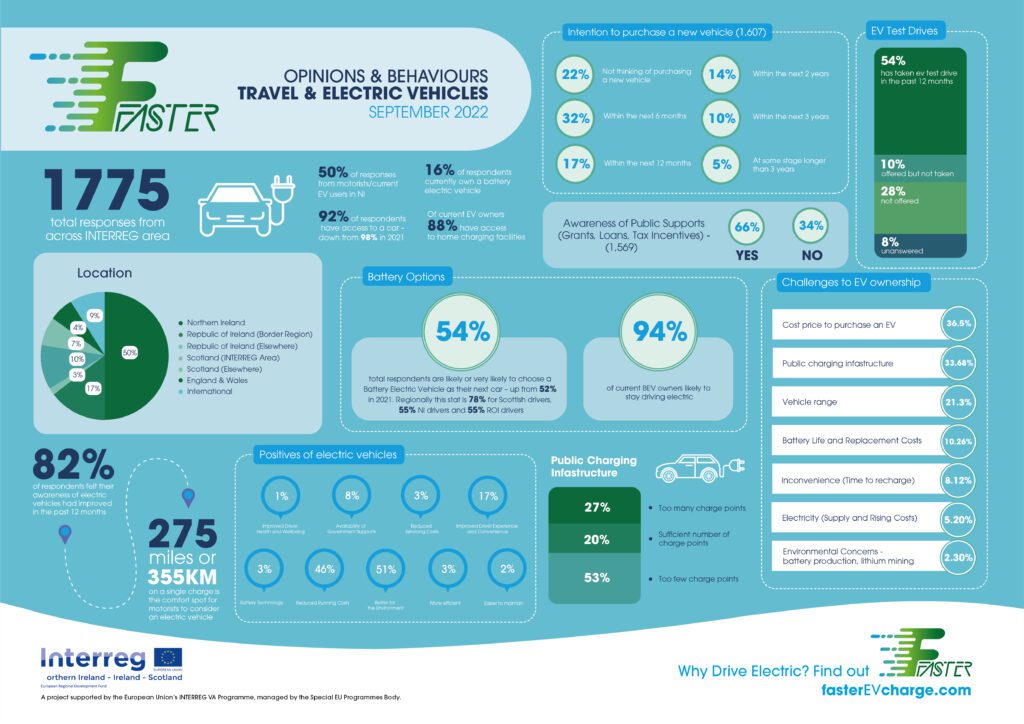 A new survey carried out in support of the FASTER Project has revealed that 55% of motorists living across the INTERREG region (Northern Ireland, Western Scotland and Republic of Ireland Border Region) are likely to purchase a battery electric vehicle when they are next changing their car